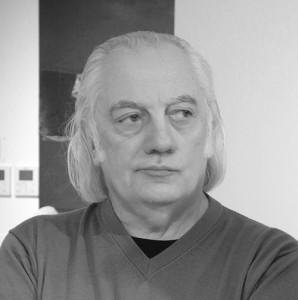 biography
Adriano Piu born in Cervignano del Friuli in 1954, lives and works in the Ancient Village of Chiarmacis, municipality of Rivignano-Teor (Udine), Friuli, Italy. From his youth he devoted himself to painting, starting in the 70s with his first private exhibitions and refining its own expressiveness. In the 80s he participates in public exhibitions and showcases in galleries across Italy.

The artistic vein has developed together with Adriano’s youth interest of working with metals. His undoubted excellence in welding technique using a variety of metals, have proven to be invaluable for the implementation of its precious sculptures.

In the nineties, his paintings focus on forms, signs and materials; he also starts to experience sculpture as a different to way to express his intense passion in shaping metallic materials (iron, corten, aluminum, bronze, steel and wood). His first sculptures evolve through a continuous experimentation that leads him to focus on stainless steel sculptures.

During this period of full-time artist he takes part in International exhibitions and various editions of Art Fairs in Europe and the United States, starting an intense collaboration with important European galleries (Swiss, German, Belgian, and French). His works are presented in both public and private collections.

It is during the ‘Artexpo ’90 in New York that he meets the owner of the Frames’s Gallery, Knokke Zoute, with whom he worked for three years participating in various exhibitions and fairs.

His first contract is with Italian Lorenzo Lanza of Art Gallery Studio Lanza in Verbania which makes Piu known in neighboring Switzerland. Its presence in the country is also appreciated by the gallery of Jansen Bags gallery of Ascona (Switzerland), with whom he began a fruitful collaboration (2004-2009). This period sees its participation in a number of solo exhibitions in various
galleries and institutions across northern Europe, and signs a successful deal with Grenken museum for four of his artworks.

A curious incident, which occurred on the occasion of the exhibition at Schroder Gallery in Cologne, sees the artist climbing on and paddling the gondola used in a film by Paul Newman to cross the Rhine River, episode reported with emphasis on the following day by the German press.

His other artworks are exposed in the Miniatur Museum in Amsterdam, in the collection of VP Bank Vaduz (Liectestain) and at the Gallery Colours de Temp, Geneva (Switzerland) together with Dorazio, Dova and Santomaso.

Another interesting event in 1990 takes Piu at the Art Gallery Le Lac Lugano, where famous artists like Afro, Scannavino, Santomaso particpate too.

At the beginning of the new millennium, it is his meeting with the art dealer Ferrero in Nice that gives Piu the opportunity to exhibit his works along with Sesar (already passed away in 1998),Christo and Arnan; the association with the last two determines a turning point in Piu’s artistic process, bringing it to a full artistic maturity and the achievement of a personal style that still characterizes him.

In 2004 The Department of Culture of the Municipality of Arezzo dedicates an exhibition in Palazzo Sabatini Vincenzi, organised by the art critic Giorgio Segato, and one of Piu paintings is placed in the collection of Chianini Vincenzi Museum, in the heart of Arezzo.

In 2005 the writer and painter Milena Milani (companion of the great Carlo Cardazzo) personally organizes Piu exhibition in Albissola Marina. On this occasion the pieces in show are his ceramic works. The artistic partnership brings Milani to put one of his artworks in the Foundation Museum of Contemporary Art Milena Milani in Memory of Carlo Cardazzo.

In these years, some of Piu works are also exhibited at the Fair of Art of San Fransisco USA.

Another long standing collaboration, since the beginning of the century, is with Urs Reichlin gallery Kussnacht (Switzerland) recently moved to Zug, with many exhibitions and fairs all over the Swiss-German territories.

Piu exposes his artwork in New York at the Kours Gallery and then comes back to his native region (Friuli Venezia Giulila), where the Province of Udine dedicated to him a retrospective in 2009 in Cividale del Friuli at the church Mary of the Beaten.

The last period of artistic activity is influenced by an intense and sometimes suffered inner journey that is represented in his most current art works.

This is how the series Circuits and Neuronal Brain Symbologies, Venezie comes to light, he decides to dedicate it to the nearby city that Piu loves very much.

With the last major turning point, MOVIMENTO INTERLOCUTORIO, the artist is discovered and appreciated in 2015 by Willy Montini and Stefano Orler of Artetivu, followed by a brief collaboration, which ended immediately after the presentation of this series on television,

These are innovative mobile works in which the artist makes the audience interact allowing them to vary moving parts of the work itself to his liking, BECOMING A PART OF THE OPERA .. Remarkable the success of these works on the move in the recent exhibition at the Alfons Blomme Museum in Roselare (Belgium), also confirmed by the exhibition at the Urs Reichlin gallery in Zug (Switzerland).

ADGallery , Gent (Belgium) has decided to expose these pieces during their Art Fair in Amsterdam and in Waregem (Belgium) in 2016. Highlights for the year 2017 are the Exhibition at the Kunsthalle Messmer Museum in Riegel (Borough of Baden Wurttemberg, Germany) along with Victor Vasarely, Carlos Crus Diez, Regine Schumann, Hans Kotter, Kammerer Luka, Sigfried Kreitner and Ludwig Wilding, and the personal exposition at the Gallery m, which is located inside the Kunstalle Messmer Museum.

In 2019 Erpac, the Department of Culture of the Rivignano-Teor Municipality, will be hosted by the Friluli Venezia Giulia Region, with a personal exhibition at Villa Manin in Passariano, Friuli Venezia Giulia, (Italy).